Please be advised that a blog claiming to be an Old Roman Catholic Church Directory is in fact an unauthorised facsimile of this Directory and does not have the approbation of any recognised canonical Old Roman Catholic jurisdiction.
While clearly the author of the blog attempts to follow closely and mirror updates from this website to his own, being unauthorised it cannot be relied upon to give up to date and qualified information about Old Roman Catholic clerics.
The blog is authored by a Rutherford Johnson, neither he personally nor his denomination, the Imperial Patriarchate of St. Stephen, Anglican Rite Roman Catholic Church has any connection historical or otherwise with any of the canonical Old Roman Catholic jurisdictions. The fact that the author has lifted information from this website without seeking permission nor indeed attributing the origin of said information from this Directory on his facsimile, somewhat betrays the character of said author.
The supposed Apostolic Succession of Rutherford Johnson is descended through the schismatic line of one Earl Anglin James, who though consecrated a bishop by Archbishop Carfora in 1945, was deposed and excommunicated on 29th January 1947 for a most serious act of schism. Rutherford Johnson claims to have received his supposed episcopal ordination from one Darel E Chase, who’s clearly protestant background and erratic denominational history is represented in his own words below.
Rutherford Johnson also claims succession from one Keith Patrick Steinhurst through the schismatic and heretical theosophical sects derived from Frederick Samuel Willoughby of the Liberal Old Catholic Church deposed by Archbishop Mathew, and Lowell Paul Wadle of the American Catholic Church and Justin A. Boyle aka Robert Raleigh of the Apostolic Christian Church through the infamous and highly irregular convergence of lines claimed by Hugh George de Wilmott-Newman. Neither one of his co-consecrating “bishops”, Darel E Chase nor Keith Patrick Steinhurst were ever Old Roman Catholics.
It is the qualified opinion of the Editorial Committee of this authorised Old Roman Catholic Clerical Directory that the apostolic succession claimed by Rutherford Johnson received through Darel E Chase is most certainly of questionable validity and of extremely doubtful sacramental efficacy. For this reason it is recommended both men be considered vitandus and Old Roman Catholic clergy and faithful alike are admonished to avoid their ministrations and those connected with them. 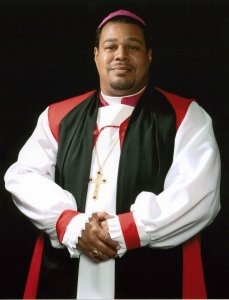 Archbishop+++D. E. Chase is a dedicated and anointed Man of God. He is the Founding Patriarch of the Abyssinian Apostolic Church, and the Presiding Prelate of the Apostolic Communion of Anglican Churches, which is an independent Anglican Rite Jurisdiction of the One, Holy, Catholic and Apostolic Church. He is the Metropolitan Archbishop of the Archdiocese of the Mid-West, and is also the Founding Prelate of the International College of Bishops. Archbishop Chase is also the Pastor of the Metropolitan Cathedral.
Archbishop is married to the love of his life, Lady Tia Chase. Lady Tia is an anointed, talented and gifted Woman of God and walks side by side with the Archbishop.
Archbishop Chase was raised in New Jersey and was initially raised in the Anglican Church. He credits his sense of structure and liturgical training to his childhood Christian upbringing. While in his early twenties and leaving his home, he found himself seeking more in depth knowledge of the Scriptures and a more open worship environment. This is when he became “non-denominational,” and was initially licensed and ordained as a Minister of the Gospel.
Returning home to New Jersey, Archbishop attended the New Shiloh Missionary Baptist Church. While there, he was licensed and ordained at the hand of his Father in the Ministry, (the late) Bishop Alfred Blakely, DD. Serving at New Shiloh, Archbishop Chase served as Administrator and Liaison Officer. He was active in the Urban Ministry and Evangelism campaign at New Shiloh, through American Baptist Churches USA (NJ).
Taking heed to the calling of the Lord, Archbishop Chase was led to unite ministers from various denominational backgrounds. It has always been his agenda to put aside denominational and dogmatic philosophy and unite under the banner of the Messiah alone. It was at this time, he was initially consecrated to the office and dignity of Bishop at the hands of Bishop John H. Covington and Bishop Lawrence J. Grayson of the Full Gospel Missionary Church in June of 1999. Since then he has had the privilege and honor of ordaining several men and women into the ministry and, consecrating several Bishops throughout the US and abroad.
Returning to Liturgical and Sacramental worship, the Archbishop united with the United Evangelical Episcopal Church. He was received into Holy Orders and ordained Deacon, and later Priest at the hand of the former Presiding Bishop of the United Evangelical Episcopal Church, The Rt. Rev. John W. Wilcox.
In June of 2001, Archbishop++D. E. Chase was consecrated, commissioned, affirmed and confirmed to the Apostleship through Apostle K. Edwards of the National Pentecostal Holiness Assemblies. In June of 2004, he was Consecrated and ordained Bishop in the United Evangelical Episcopal Church by the hand of The Mst. Rev. John P. Johnston – Metropolitan of the Ecumenical Apostolic Church Archdiocese. In February of 2005 he was elevated and Coronated Archbishop and Patriarch and bestowed full lines of Apostolic Succession via the. The Archbishop was also received into Sacred Orders in the Holy Order of St. Paul the Apostle, which is a sacred, ecumenical order dedicated to biblical scholarship and unity within the body of Christ.
Throughout his ministry, Archbishop Chase has planted several churches and ministries. Remaining true to his calling and ministry that the Lord appointed him to, Archbishop Chase is now the organizer, developer, Senior Pastor and Establishmentarian of Metropolitan Cathedral.

This site uses Akismet to reduce spam. Learn how your comment data is processed.